In March 2020, our self-funded HER Planet Earth team of 10 women succeeded in biking across the frozen lands of the Arctic Circle Trail of Greenland – a world’s first. Along the way, the team had to battle temperatures of minus 20 to minus 40 degrees Celsius, ride across 200km on all types of snow, ice, mud and rock, cycle up and down many hills and mountain passes, and cross vast frozen, crackling lakes – it was an extraordinary and unforgettable experience!

The objective of this 200km pioneering expedition was to raise awareness and funds (a team total of S$50,000) for underprivileged women affected by climate change in the Asia region. During the event the team will share stories of their experience journeying across the Arctic on fat bikes. In the past decade, disasters have led to the loss of 700 thousand lives, 1.7 billion people affected and economic losses of USD 1.4 trillion. These effects disproportionately affect women and girls: multiple discriminations mean that women are more vulnerable in crises and post disasters situations. In view of this, the team will partner with  non-profit organisation, UN Women, and fundraise for their projects focused on the economic empowerment of women in rural areas of Asia, ultimately helping them build climate change resilience.
​ 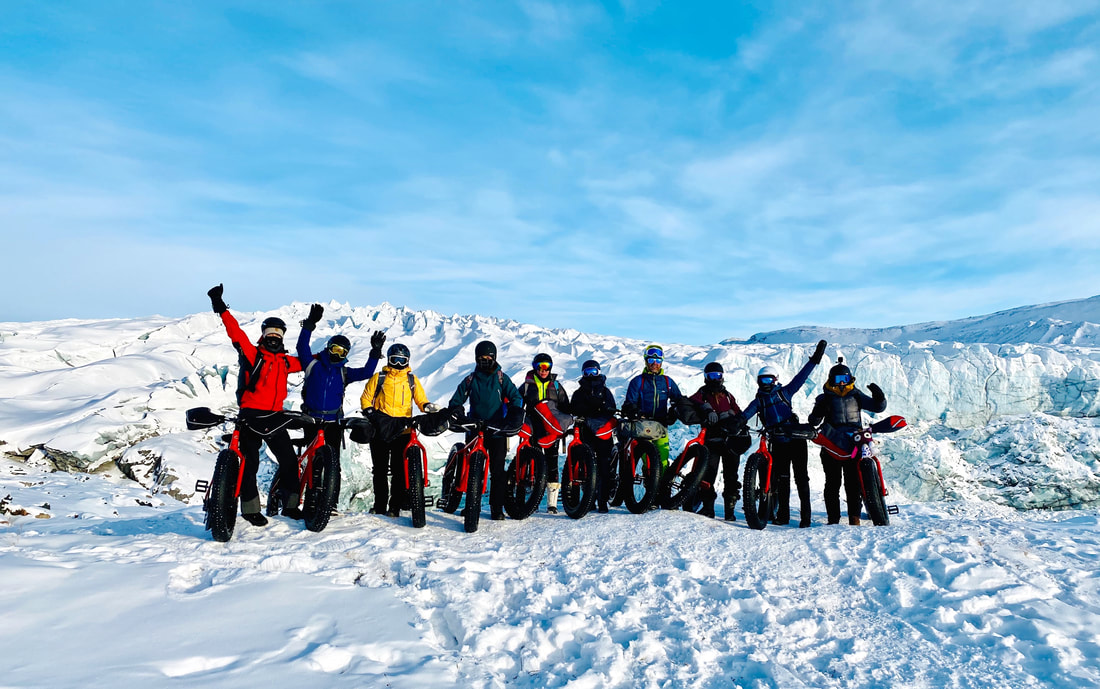 The Challenge
The Team’s Journey
​
The journey started in Copenhagen, where the international all-female team came in from Moscow, Hong Kong and Singapore and met up with expedition guide, Paul Spackman, part of UK-based company Secret Compass, founded by ex-British military officers of Her Majesty's Forces Parachute Regiment, who are pioneers in adventurous travel leading expeditions to some of the most remote regions on earth. The team then flew to Kangerlussuaq, Greenland and connected with their local crew and support vehicles from Sirius Greenland, before beginning their six-days biking expedition, from the Russell Glacier all the way to the coastal town of Sisimiut.

Along the way, they had to battle extreme and bitter cold conditions, with temperatures ranging from -20 to -40 degrees Celsius. Covering 200km, the team rode on all types of terrain, from hard packed and powdery snow, to slippery ice, mud and rock. Along the way, the women cycled up and down many hills and mountain passes and across vast frozen, crackling lakes and fiords. The days on the trail were long and tiring, with no shelter from the bitter cold and wind for up to ten hours each day, which sometimes even saw them reach their huts for the evening in complete darkness.

“This was by far one of HER Planet Earth’s toughest challenges. Given the extreme Arctic conditions, we were very careful to avoid any frost bite injuries and luckily, despite the multiple falls and wipe-outs, there were no broken bones, just a few sprains, bruises and aches & pains,” shared HER Planet Earth Founder and CEO, Christine Amour-Levar.

During their time in Sisimiut, the team also met with local female leaders from the community, to discuss the importance of gender equality and how climate change has affected life on the island. Greenland's strategic importance has grown recently amid increased Arctic shipping and international competition for rare minerals. Arctic waters are becoming more navigable because of melting ice, linked to global warming. The vast island is strategically located between North America and Europe, easing deliveries to many markets. Mining is expanding because Greenland's vast ice sheet has been retreating significantly in recent years. All these new economic opportunities bring added environmental and social challenges for Greenland’s 56,000 or so residents - the majority of whom are Inuit, whose ancestors migrated from Alaska through Northern Canada.
So where exactly does Greenland fit into the global process of climate change?
Greenland is an important cog in the global climate system. The central reason for this is the huge ice sheet which covers 80% of the island. This is the second largest of only two great ice sheets on the earth – the largest being on Antarctica. Greenland’s ice sheet is more than 100,000 years old and up to two miles thick, making up roughly 8% of all of Earth’s fresh water. It contains enough ice to raise global sea levels by 24 feet (7.3 metres), if all of it melted.
​
The ice sheet helps to moderate Earth’s temperatures by reflecting the sun’s energy back into space – this is known as the “albedo effect”. And due to the ice sheet’s positioning in the North Atlantic, its meltwater tempers ocean circulation patterns.
However, with Arctic air temperatures currently rising at twice the global average rate, the ice sheet is critical to conversations of climate change. As the Greenland ice sheet melts, the global sea level rises. Sea level rise could be a global-scale catastrophe since nearly one-third of the world’s population lives in or near a coastal zone.
Generally speaking, the ‘melt seasons’ of the ice sheet are becoming more and more intense. In 2012, 97% of the ice sheet experienced surface melt at some point during the year. Between 2002 and 2016 the ice sheet lost mass at a rate of around 269 gigatonnes per year. That’s 269 billion tonnes per year.